She said the State Government would need to conduct careful studies of the area’s heritage and environmental values before seeking Federal Government approval.

“The Full Court has confirmed the TAC’s central argument”

– that the works needed to open the 4WD tracks are “actions” and that such actions trigger the cultural heritage protections of the EPBC Act.

“Although the court has yet to decide what final orders it will make and what it will take into account from the submissions, this provides another opportunity for the state government to back up and not continue with this,”  – Heather Sculthorpe.

The judgment was handed down on 16 September 2016.

THE COURT ORDERS THAT:

the designation of the tracks was not an “action”,

…. the works needed to implement that decision (including re -routing tracks, spreading gravel, installing culverts and rehabilitation works) would be actions.

The Full Court held that the Honourable Justice Mortimer had adopted too broad an approach to identifying indigenous heritage values and instead found that
the values must be limited to those that are included in the National Heritage List.

However, their Honours also noted that “some context and background” may be needed to appreciate the nature of a listed indigenous heritage value. 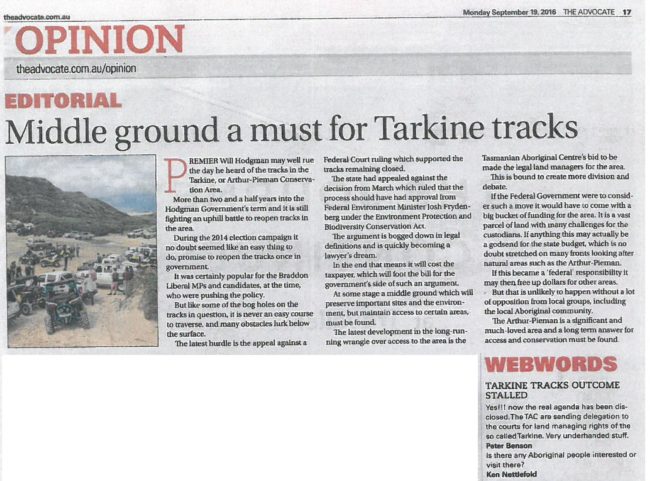 (Official): filing of appeal, including reasons.

The designation of the tracks is not an “action”

Both State and Federal Governments argue that the designation itself (‘these tracks are for vehicles’) is a regulatory step only, rather than an activity that has physical consequences, so isn’t an ‘Action’ under the EPBC Act.

Such an action is exempt.

Both governments argue that even if the designation was an “action”, they argue that it falls within the exemption given to “government authorisations”.

Both Governments will argue that Justice Mortimer was wrong to assess the values of the WTACL on the basis of evidence as to the broader significance of the area to Aboriginal people.

<- Map (click to see) of several versions of the boundary for the National Heritage Listing, evolving from ‘Tarkine’ to ‘Western Tasmanian Aboriginal Cultural Landscape (WTACL), via decision by environment Minister, Tony Burke (2013), to list the area for Aboriginal Values only (ignoring larger recommendation by Australian Heritage Council).